Career Highlight: Craig Davis played running back in high school and participated in T&F starting with a four team track program in the 5th grade.  Hamstring issues hindered a 3 year top seeded HS sprinter from ever reaching the state finals.  After his college career, he took the next 25 years before rediscovering his passion for the rubberized track surface at the 2005 Florida Sunshine State Games. From 2005-2011, he earned many Gold/Silver/Bronze medals in both the Florida State Games, Florida Senior Games, Georgia State Games, etc. In 2008, Craig sustained a herniated L5-S1 disk which sidelined and almost ended his progression back to the track but in 2011 he had a break out year with his best times be recorded. At 5’6” and shrinking, his CFO suggested that he make a website www.ShortestFastestOldestWhiteGuyIKnow.com which contains additional information and helpful health/fitness tips. 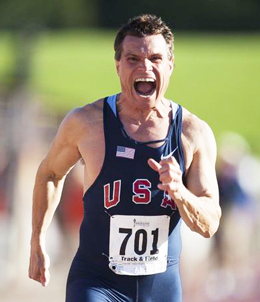 The Latest: In April 2012 with many thanks to his daughter, Craig became a first time grandfather a little girl, Ava, and they say he’s too young for one of those granddaddy names so just call him “G” or “G-Pop”!  Back to Back in April 2013 his son provided the grandson, Colt Allen, middle name after G-Pop.