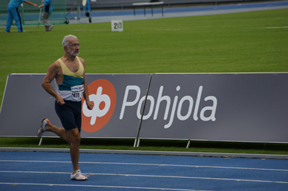 Bob Cozens of the Houston Elite track club is in preparation for the upcoming 2010 Indoor National Championships that will be held in Boston, March 26-28.  Bob, age 73 will be competing in the 200 and 400 meter dashes.  In October 2009, Bob won the World Masters Games Championship 200 meter title in Sydney, Australia. He will be running in a special age graded 200 meter race at Texas State University relays on Saturday March 20 at 6:00 pm. in Houston, Texas.